There can be many reasons why your Malinois won’t listen or obey you. Usually, this has to do with “who’s in charge”. When a Belgian Malinois is first brought home it will warm up to one person in particular. It could be you, your spouse or one of your children. The Malinois will normally bond more strongly with that individual. The Malinois will pick either by its perceived authority or by its ability to get away with things. Meaning they will pick the person they believe has the strongest authority or the weakest authority. That person should be responsible for training the Malinois further as there is already a bond with it that the K9 chose.

Malinois have “packing” instincts that are innate in every breed. It’s where dominance and authority are achieved. Malinois dogs will perceive who’s in charge on their own. This may not always be the adult. For example, a child commonly drops food while eating. A Malinois could perceive the child as the pack leader as it’s the one providing nourishment. The child could likely get the Malinois to follow commands as the Malinois has related to the child to getting food and thus its desire for the food would make it eager to obey. Children should not be in full command of a Malinois though, an adult should. Therefore, you have to establish your role as the pack leader to the K9.

The Malinois will pick up on human habits. It will listen to the one who it deems has the most authority. This is often the male head of household. That leaves the possibility that the Malinois listens to that person but not his spouse. In cases like this, it’s best for the person with no authority to gain some by spending alone time bonding and training with the Malinois. Too many people in the house trying to hold authority over the Malinois can confuse the K9. Once the pack leader has been established it’s good that he not only teaches the Malinois- but others in the household the words, motions, and sounds he uses to get the Malinois to listen & obey. Edifying the person in charge of the Malinois’ behaviors will assist the K9 in learning that humans are superior in homes and not the K9.

Bonding with the Belgian Malinois is essential to getting them to listen and obey you. Just as important, establishing authority and leading with proper training techniques can help gain attention and obedience. In families, it can be more difficult to do as there are more distractions in the environment. Each individual should spend alone time with the Malinois to establish their role over the K9. If the K9 is always walked by an adult then is walked by a child, it is more likely to test boundaries and misbehave with the child leading. Keeping things consistent with authority until truly established helps your Malinois dog to listen and obey better. 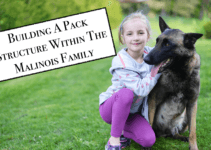